The Wudang Daoist Martial Arts Academy is located at the Temple of the Returning Dragon(Huilong Guan 回龙观), high up in Wudang Mountains. It was founded by Master Chen Shiyu in 2007. Master Chen Shiyu has been training in Wudang Shan for over 20 years and is a 15th Generation Master of Zhang San Feng Wudang Kung Fu. We are a small school, and have a peaceful environment here. Here we live a Daoist way of life, and strive to beclose to nature. Our school is somewhat hidden, and no tourists come here. 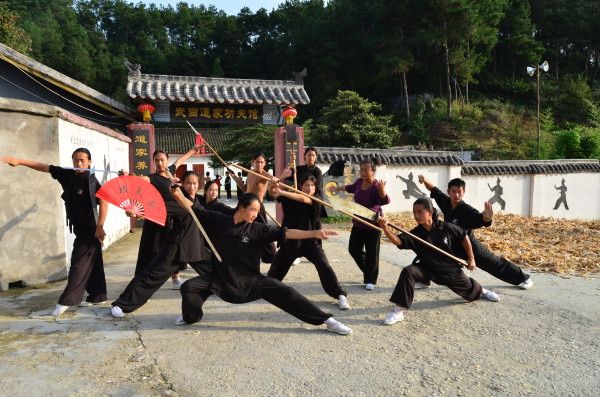 We accept students that are coming short term, and those looking for rigorous traditional programs that last several years.  Our school typically has less than 30 students in total. We welcome people of all ages and ability, only we wish that they strive to work hard to discover the true Wudang Kung Fu.  Our method of training is traditional, which can be difficult but very effective for hardworking students. We hope that students who come here can strengthen their body, learn techniques for inner cultivation, and come to a deeper understanding of traditional Daoist culture.

Master Chen Shiyu is the Headmaster of the Wudang Daoist Martial Arts Academy and it’s main instructor. He was born in Central China’s Hubei Province and now is a 15th generation Master of Wudang Taoist Kung Fu.

Master Chen Shiyu showed great interest in Wudang Kung Fu. In 1993, he left his hometown and came to Mt Wudang. He learned martial arts from different teachers for some time and then he was honored to have Grand Master Zhong Yunlong as his teacher. The Daoist Master Zhong is the 14th generation successor of Wudang Wushu of Sanfeng branch. He saw that Shiyu was very hardworking and had a honest and simple mind, so he chose him as one of the closest disciples in 1996. Since then, with the strenuous cultivation from Master Zhong, Chen Shiyu has attained Internal Wudang Kung Fu which was in the past not easily spread out. All his Gongfu styles include Wudang Tai Chi, Eight Immortal, Taiyi, Bagua, Xuangong, and Xingyi and many methods of Taoist health-preserving.

Master Chen Shiyu vows to bring Wudang Kung Fu to high development, let more people understand it and wishes every lover of Wudang Kung Fu to be healthy in body and heart; succeed the Tradition and bring it to the world.

If you would like to explore Wudang Daoist Kung Fu, you are invited to come to Huilong Temple to study with Master Chen Shiyu!