The professional school for:

The training of these departments is the goal and task of our Club Wudang Kung Fu Vienna. The above disciplines are branched into each other and together form the best possible understanding for the“internal martial arts” and thus also of health for mind and body.

For the first time in Austria

The “internal martial arts” in Wudang Kung Fu is taught as a whole system in Vienna. The Wudang style is the oldest known style from China and laid the foundations for countless variations for different styles and schools. Competitions or demonstrations are in the Wudang style not in the foreground, but the preoccupation with the self, the body control, and for improving health.
Unfortunately, is the quality of schools in Europe not sufficiently tested, and most of them are significant umbrella associations that each slide to certificates. This leads to shallow standards in Tai Chi, Qi Gong, and other disciplines of “internal martial arts.”
Wudang Kung Fu Vienna is the first approved Wudang school in Austria from the Sanfeng family in the Wudang mountains. It represents the teachings of Zhang Sanfeng – the founder of “internal martial arts” in Vienna. 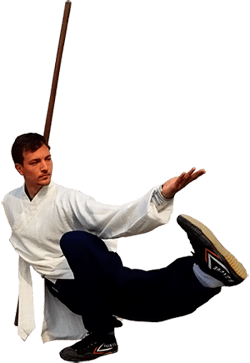 Intrigued by Kung Fu since his childhood, Michael Weichhardt, as a favorite student of the master learned from Yuan Xiu gang and Master Chen Shiyu at the Wudang Sanfeng Taoist Academy, the Taoist internal martial arts principles of Wudang Sanfeng. He was a Taoist named魏懋资济(pinyin: WeiMaoZiJi). During his training, he lived for a long time in the Wudang mountains and rarely came back to his native Vienna.

During this time, he internalized the different styles of the Wudang school, including Taiji, Liangyi, Baxian, Bagua, Baji, Fuhu, Longhua, Xuanwu, and Xuangong.

On 3 may 2015 Michael Weichhardt again returned to Vienna, to be in his homeland the Wudang martial arts and Taoist culture to convey the traditions of Sanfengpai.

Michael Weichhardt attained the name “Master Ziji (资济)” in the course of his training. He also served as a trainer in the “Wudang Taoist school for internal martial arts” in Wudang (China) by Master Chen Shiyu and trained as a Taoist student. Master Ziji was appointed last year by a tough traditional training.